Blocked drains are a nuisance; try clearing them with these helpful hints

There’s no doubt that struggling with blocked drains in your household is very annoying. Seemingly, more often than not the problem happens at the most inconvenient of times. This article will explore the methods we most often hear about, providing you with some essential advice on how to unblock a drain.

Need professional help with a blocked drain in Brisbane? The team at Brisbane Plumbing and Drainage are experienced at quickly clearing even the most clogged drains.

First and foremost, we’re aware of the presence of drain cleaners on the market. Found in supermarket aisles and hardware stores, these solutions contain dangerous chemicals. Drain cleaners aren’t just an environmental hazard; they can pose a threat to your plumbing system and fixtures and are also dangerous to your health.

One of the most commonly used chemical drain cleaners is caustic soda. Avoid using caustic soda as it can melt the pipes and if it fails to clear the blockage and remains backed up in the drain you might have to use a plunger or drain snake to help get rid of the clog which poses a risk of chemical burns.

You might have read about using a coat hanger to clear blocked drains. However, the blockages are often too deep inside the plumbing to be able to reach, plus a hanger wire may not be strong enough to clear the debris. The wire may also get stuck in the pipe or worse, break due to the blockage causing more problems than you originally had.

Easy remedies on how to unblock a drain

Naturally, a lot of us try to fix problems around the house by ourselves, in a quest to save both money and effort. Having said that, it isn’t recommended that you try a DIY drain clearing as you could be risking further damage to your plumbing system. However, if you’re so inclined, read on for a guide on home remedies.

Outlined below are some safer, more natural remedies for clearing blocked drains.

To preface this, we highly recommend you take necessary safety precautions when carrying out any plumbing maintenance by yourself. This includes wearing rubber gloves, long-sleeved clothing, closed-in footwear and if possible, eye protection.

A tad old school, perhaps, though your typical household plunger can prove an effective tool on how to unblock a drain. The method of operation is as follows:

Simple and mostly risk-free, using hot water to flush your drains is a great way to remove smaller blockages. Remember with this method, heating the water at too high a temperature can cause damage to the structure of PVC pipes.

The method involves a bit of repetition if you want your drain to run as clearly as possible.

The combination of baking soda, vinegar and boiling water is a proven gentle way on how to unblock a drain.

When baking soda and vinegar are mixed together, it creates a bubbling reaction that can loosen and break through the build-up in the drain. 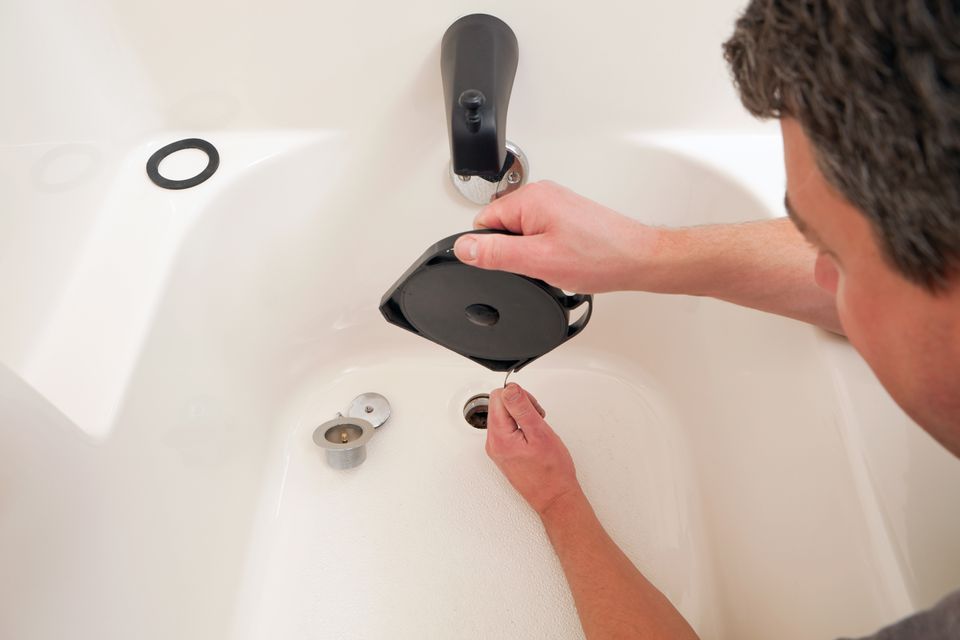 If plunging doesn’t work, a drain auger or a snake can help remove the stubborn blockages. A drain snake is a flexible and long metallic cable with an uncoiled spring that goes into the pipe.

Note: Although drain snakes are good at unclogging drains, they can damage pipes if not used correctly. Use it only if you are confident.

To use a drain snake:

If you still have a blocked drain, consider calling in our expert Brisbane plumbers.

P-trap can collect debris before it becomes lodged any further inside the pipes. This vital part of your plumbing system is located directly under the sink and can be removed and cleaned easily. If you are good at taking apart things and assembling them, this approach can help keep drains clear if carried out regularly.

This should fix most blocked sink drains unless the blockage is deeper into the plumbing system.

As previously mentioned, it’s highly recommended that you leave all your plumbing issues to fully licenced professionals.

Blocked drains can represent an underlying problem in your plumbing system. For example, annoyances such as blocked toilets and blocked stormwater drains can be a result of tree roots in underground pipes or the presence of foreign matter in your drains. Only a fully qualified plumber has the experience and technical skills to make sure your drains are in proper working order.

For an efficient, complete fix to your drainage issues, get in touch with the professionals at Brisbane Plumbing and Drainage today!